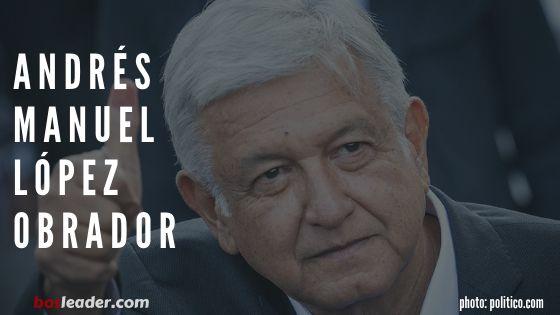 Mexico already has a new leader who reportedly displays a distinctive leadership style. He is Andres Manuel Lopez Obrador, the current leader of Mexico. Obrador successfully won the 2018 Mexican Election with a large vote.

Obrador is a former mayor of Mexico City. Although he had lost the previous election, he did not give up in winning the presidency. He continued to carry out non-stop campaigns for 13 years.

His work paid off when the official quick count from the country showed Obrador getting a vote of 53%. He finally managed to defeat his enemy, Ricardo Anaya and José Antonio Meade. In fact, two of the main candidates for Lopez Obrador, Jose Antonio Meade and Ricardo Anaya, acknowledged his superiority of the elected president.

The promise of the campaign carried by Lopez Obrador proved successful in attracting the dominant voice of Mexican voters. He promises many things, ranging from eradicating corruption to suppressing high crime rates. His political direction tends to be populist, nationalist, and leftist.

Lopez Obrador's victory overhauled the political order in the Aztec Country. The supporting party, the National Regeneration Movement (Morena) is a new player in Mexico's political map. However, this party succeeded in shifting the establishment of the party which had dominated the country for almost eight decades, the Institutional Revolutionary Party (PRI).

This man who was born in Mexico, November 13, 1953 showed a relaxed leadership attitude. He is an easy going people. However, this raised concerns about his safety in Mexico, which was often hit by violence. In lieu of the police, half a dozen television cameramen on motorbikes surrounded the Lopez Obrador car.

He used to be like that. For example when heading to a meeting with President Enrique Pena Nieto at the National Palace, in the heart of Mexico. "The people will protect me," Lopez Obrador told reporters who questioned the lack of special security for him.

He advised reporters to protect him from behind, but jokingly said "I have been hit by a camera several times, please do not crush me" he told reporters.

The victory of presidential candidate Lopez Obrador came amid the complicated negotiations between Mexico-US-Canada in the North American Free Trade Agreement or NAFTA, as well as the issue of Mexican-US immigration.

Mexican voters hope that the elected president will be able to be "tough" diplomatic with world leaders, especially with neighboring countries and in particular, President Trump, to end the polemic on NAFTA negotiations and bring their own economic benefits to the Aztec State.

Trump himself recognized the superiority of Obrador and had congratulated him on his leadership in Mexico. Aside from Trump, many US officials also flatter Obrador. "Lopez Obrador is a strong nationalist, but he might still try to work closely with the US on certain issues," said Jason Marczak, director of the Atlantic Council's Adrienne Arsht Latin America Center to Vox.

"Especially around the recent imposition of steel and aluminum tariffs in Mexico, the response is that the president of Mexico should find more opportunities to sit and talk with President Trump," Marczak said.

Obrador, this current leader of Mexico is ready to give a new color to Mexico's political journey and in Mexico's relations with other countries. Hopefully the color given is the best color for all.