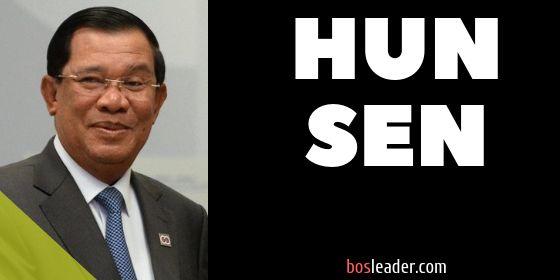 Do you know who is the leader of Cambodia at this time? The current leader of Cambodia has also managed to survive longer than the Khmer Rouge regime. He controlled Cambodia in a very long time, getting rid of his kingdom and political opponents.

He is Hun Sen. Hun Sen's strength is characterized by centralized leadership, political resilience and oppression. The 65-year-old leader is part of an elite group of world leaders who have succeeded in power for three decades. Hun Sen succeeded in overcoming a political attack that continued to color the impoverished Southeast Asian country since the Cold War.

The leadership of the Cambodian People's Party won the election effectively because it had no opponents, after the only strongest opposition party in Cambodia was dissolved by the Supreme Court the previous year.

Cambodian Prime Minister Hun Sen has been in power in Cambodia for 34 years and until now wants to maintain his position through the Cambodian general election held on July 29 2018. Although the election was criticized by many because it was not included in the opposition party after it was dissolved a year earlier.

However, the result is that Hun Sen continues to win and be appointed as the current leader of Cambodia in one more period. As quoted by The Economist, in November 2017, the Supreme Court of Cambodia ruled that the opposition party, CNRP, was part of a plan for foreign parties to overthrow the Cambodian People's Party (CPP), the ruling majority party.

Many CNRP members have left Cambodia. Those who are persistent are disqualified from nominating elections. Since September, the CNRP president, Kem Sokha, has been detained without undergoing a trial.

Hun Sen was born April 4, 1951 in Kâmpóng Cham Province, Cambodia. He has been the prime minister of Cambodia since 1985. Hun Sen was educated in a Buddhist monastery in Phnom Penh. In the late 1960s he joined the Communist Party in Kampuchea and in 1970 joined the Khmer Rouge.

During the Pol Pot regime (1975-1979), when two million Cambodians lost their lives, Hun Sen fled to Vietnam. He joined there and turned against the Khmer Rouge. He returned to Cambodia after Vietnam established a new government in 1979 and he was appointed minister of foreign affairs.

Hun Sen was appointed foreign minister in the new puppet government before he was 30 years old. In 1985 he was prime minister, a position he refused to step down even after the election was overseen by the United Nations in 1993, which ended with a 'hanging parliament' with a royal support party, FUNCINPEC, which held the highest number of seats.

He was reluctant to share power with the royal leader, Prince Norodom Ranariddh, until 1997, when he expelled him. But Prince Ranariddh finally reconciled with Hun Sen. Prince himself spent his days in the colonial-era hotel Raffles.

His softer half brother, Norodom Sihamoni, who had studied making films in Pyongyang and taught ballet in Paris, was a symbolic king, because Hun Sen's hand was fully held. Hun Sen's strength, or his genius, is to survive.